This year, why not celebrate Veterans Day by visiting the city where it all began.

Surprisingly, that city is not in Europe and it’s not Washington, DC. The city where Veterans Day all began is Emporia, Kansas.

That was in 1918 and for thirty-five years Armistice Day honored the veterans of World War I. But during that time there was a second World War, and with it came more veterans.

Out in America’s Heartland, in the small city of Emporia Kansas, a man named Alvin J. King and his wife Gertrude had helped raise up his nephew, John Cooper, in the way that is done in small towns. Pfc. John E. Cooper left Emporia to serve as an ammunition handler, but died in a German forest before he could return. He was killed in action December 20th, 1944 and buried in Limey, France.

Along with the help of the local American Legion, and the Veterans of Foreign Wars, Alvin got the people of Emporia to organize an “All Veterans Day” in 1953. Schools and businesses were closed, so everyone turned out for a parade, followed by church bells, air raid sirens, and a stirring rendition of Taps at 11:00 am. Then came hot dogs, a wheelchair basketball game, free movie at the drive-in and a dance.

One of the celebrities there that day was Emporia’s native son US Representative Edward Rees. Rees had been very helpful to Alvin King in planning the day’s events, but more importantly, Rees had also taken Alvin’s idea back to Washington DC, and on October 8th of the following year, 1954, President Eisenhower signed a bill renaming Armistice Day to Veterans Day.

Today the City of Emporia has changed a little, and yet changed a lot. It still exudes the small town friendliness and camaraderie that gave Alvin King and his compatriots the drive to change a National Holiday over fifty years ago. Pride for those serving our country can be seen everywhere and everyday, not just on Veterans Day.

Take a trip out there someday, out to America’s Heartland. Stop by the Commercial Street Diner, where the locals socialize. Have lunch at Amanda’s Bakery or Casa Ramos. Stay overnight in a Victorian bed and breakfast so you can visit the David Traylor Zoo, located in Soden’s Grove Park along with the All Veterans Memorial. If it’s Summer, you can take a ride on the small train there after a day at the slides, waterfalls and lazy river of Jones Aquatic Center or a round of golf at the Municipal Golf Course.

Only a place so perfectly Hometown American could have come up with the idea to honor not some, but all of America’s veterans. Thank you, Emporia. And thank you, Veterans.

Special thanks to Kala Maxfield and the Emporia Area Chamber & Vistors Bureau for all their help obtaining period photos. Kala is beyond helpful. Thanks also to the Lyon County Historical Society and The IM Design Group. When I say the people of Emporia are friendly, I speak from experience. 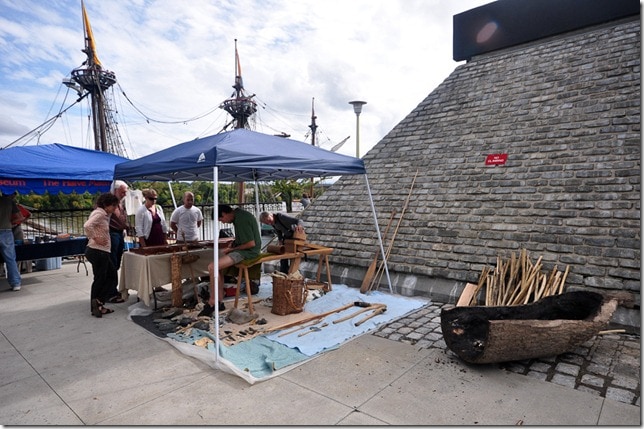 Despite recent historic weather events, the Half Moon – a full-scale, operating replica of the Dutch ship of exploration that Henry Hudson sailed in 1609 – arrived in Albany on September 20 to a grand water display and cannon fire. For three weeks, the Half Moon will be docked at the Albany Riverfront Water Pumping…

As the main science museum in New York’s Tech Valley, the Schenectady Museum can seem more like a historical archive of General Electric’s illustrious past than a current exploration of the new and vibrant technologies and research that are happening in 21st century Capital Region institutions. The GE-100, a concept all-electric car, was built in…

Battling a world-class case of jetlag, I wasn’t in the mood to tackle anything too ambitious on our first day in India. A late morning brunch at The Leela Palace Hotel, followed by a leisurely stroll through the National Museum in New Delhi fit the bill. Even better, the art exhibits provided much-needed context for…

Have you ever read a book of fiction and the setting became so real that you wanted to visit as soon as you finished the last page? Of course, that’s possible with some stories. Read a book about the Civil War and visit Gettysburg. Get lost in a spy novel and visit Washington DC or…