Hanuman, the popular monkey deity in Hindu religion, can be found in statues and carvings at temples and shrines throughout India. But that’s not where Galwar Bagh, the Hindu pilgrimage site near Jaipur, India got its name. No, the origins of the site’s nickname comes from a less spiritual source. Real monkeys – both Rhesus Macaques and Gray Langurs (AKA Hanuman Langurs) – are the main tourist attraction and danger of Jaipur’s Monkey Temple.

We visited Galwar Bagh on our way back from the rural Rajasthan village tour. My kids were fairly tired by then, and none too interested in visiting temples. But monkeys, real live free range monkeys…well, when might we see that again?  Admission is free, but we sprang for the 50 rupee (approx. $1) camera fee so that we could take photos. We also bought two bags of peanuts (20 rupees each) so that both kids could feed the monkeys.

As we entered the complex, we wondered if there were any monkeys on site. We had to pass the main temple and a number of holy natural spring tanks, where thousands bathe every year, before sighting the first monkey. But as soon as the monkeys noticed fresh tourists bearing peanuts, they came to us. Within seconds, Kayla lost one of the bags of peanuts in a grab and dash by a battle-worn macaque who wasn’t content with the one peanut at a time delivery method.

We were warned not to feed the Hanuman Langurs. Fewer in number, but much bigger than the macaques, they seemed to rule this little kingdom. And with baby monkeys on deck, we gave them a wide berth.

But the little macaques were so adorable, my children couldn’t resist the chance to hold one. Kayla cradled one like a baby in her arms…

Alex didn’t fare so well, ending with a monkey on his back.

Both kids soon learned that even the macaques should be approached cautiously. One especially adorable baby monkey…

…turned into a Gremlin when Alex made the mistake of teasing him with bared teeth.

They learned a few lessons that day, including why there were so many baby monkeys at the holy pilgrimage site.

It wasn’t until much later that it even occurred to me just how dangerous this little expedition could’ve been. If any of us had been scratched by one of these monkeys, it’s entirely possible that we would have been exposed to rabies. 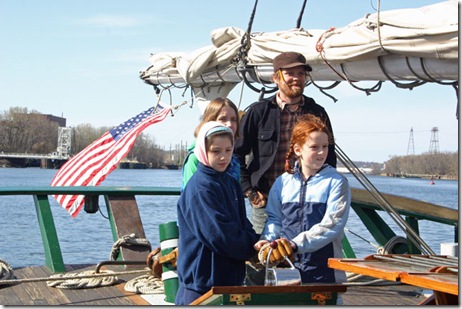 Observing a moment of silence on the Hudson River, Rensselaer County Girl Scouts took the time to appreciate the beauty around them: serene, sparkling waters, the warmth of the sun, and the sound of gentle waves lapping the sailboat. They were fortunate to have glorious weather and clear waters, on a river that has been…

Travel photos have power. They draw us to distant lands, connecting us with people and places far, far away. And our own travel photos carry the memories of transformative experiences. So when Jessie Voigts of Wandering Educators invited me to take part in in HostelBookers 7 Super Shots – where each travel blogger shares their…