The other day, my husband received a letter from a patient that was so very special, that he had to share an excerpt:

I must confess. This letter made me smile, and I wasn’t the only one whose heart it warmed.

That’s what it’s all about, after all, the reason he went into medicine, and the reason he chose to subspecialize within ENT. To make a difference. To help people hear.

It’s cutting it close, but you’re not to late to plan to attend a Hearing Health Seminar in Albany where you can meet local heroes who make hearing possible for this young person, and others like him, every day.

The touring Hearing Health Seminar will take place on Saturday, October 8th, from 8 a.m. to 12:30 p.m. at the Albany Marriot. Local audiologists will lead off with a discussion of “When Hearing Aids Are No Longer,” followed by an education session on “Hearing and Living with Cochlear Implants.”

This will be followed by “Getting a Cochlear Implant” and a physician question and answer panel that will include two of the best cochlear implant surgeons in the country, David Foyt, M.D., and Jason Mouzakes, M.D.

And you will also get to hear from local Queensbury resident, Kassey Granger, who will share her personal journey with cochlear implants.

Kassey comes from a family with progressive hearing loss, including her grandmother and mother. Granger’s hearing loss was discovered in first grade, but she didn’t begin wearing hearing aids until her 20s, after her second child was born. She eventually stopped working in a secretarial position because she was unable to converse on the phone and began doing data entry from home.

In 2010, after researching cochlear implants, Kassey decided to move forward with surgery. After Granger’s implant was activated, she heard noise but could not understand speech. Her mother encouraged and helped her train the new ear. Granger made astounding progress within weeks – even her audiologist was amazed by her rapid improvement. One month later she returned to work and was able to answer the phone within two months.

Granger is now happily employed at the Association for the Hearing Impaired, an organization that was started by her mother.

Not in Albany? No worries. A series of Hearing Health Seminars have been scheduled around the nation. Or, schedule a visit with local physicians who will happily answer all your questions.

And here is Amelia, born profoundly deaf, at the activation of her cochlear implants when she was eighteen months old.

Interested in an all-expense paid trip to Salzburg, Austria that includes tickets to the opening night party of the legendary musical THE SOUND OF MUSIC at the Salzburger Landestheater? Given the response to Albany Kid’s giveaway of a Sound of Music Soundtrack in celebration of HDTV’s airing of the movie, I’m guessing this might appeal…

By Vanessa Van Petten, creator of RadicalParenting.com and author of the parenting book, “Do I Get My Allowance Before or After I’m Grounded?” When I was 16 I thought it was my Dad’s goal in life to make me miserable. I was convinced that he had a running list of all the ways he could… 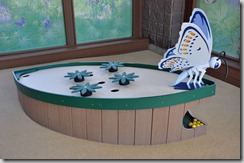 The pleasures of a garden in winter are subtle: respite, and the promise of brighter things to come. It’s fitting that on the gloomiest, rainiest of days for a college tour at Cornell University; the sun broke out as we strolled through the Winter Garden at Cornell Plantations. Table of Contents Cornell Plantations Welcome CenterEnter…